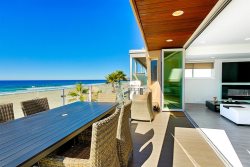 In 1542, Portuguese explorer Juan Rodriguez Cabrillo sailed into San Diego Bay under the Spanish flag and was the first European to discover California. As California’s birthplace, San Diego reflects a diverse culture rich in history. Learn about California from its ancient past to Spanish colonization, its Mexican and early American periods, and today. Follow in the footsteps of local pioneers and travel back in time through San Diego’s past at a multitude of fascinating museums, historic sites and parks. In addition, explore the area’s military heritage, science, art and more.

Purchase discount tickets to San Diego’s most popular attractions and save.

A hidden gem off the beaten path, Heritage Park is adjacent to Old Town San Diego State Historic Park and features several restored Victorian homes and the city’s first synagogue, Temple Beth Israel. The charming park showcases examples of the Victorian architecture of wealthy San Diego residents in the 1880s–1890s. Homes include the Senlis Cottage, Sherman-Gilbert House, Bushyhead House, Christian House, McConaughy House and the Burton House. With the exception of the Senlis Cottage and Temple Beth Israel, the homes are not open to the public.

Operated by the San Diego History Center, the beautiful Junípero Serra Museum is an iconic regional landmark. Located just above Old Town San Diego State Historic Park at Presidio Park, the Serra sits on one of the most significant historical sites on the West Coast, the site of the first permanent European settlement in what is now California. It was here in 1769 that a Spanish Franciscan missionary, Father Junípero Serra, with a group of soldiers led by Gaspar de Portolá, established Alta California’s first mission and presidio (fort). The museum showcases items left behind from the settlement and the area’s early inhabitants.

Originally founded in 1769 at the settlement at Presidio Park, San Diego de Alcalá is the second location of California’s first mission church and marks the birthplace of Christianity on the West Coast. As the first of the 21 great California missions, the historical shrine provides an understanding of the beginning of Catholicism in the area and an appreciation for the dedicated Spanish priests who traveled far from their home. Enjoy guided tours of the beautiful mission and its compound including a museum and garden.

With something for everyone, Balboa Park is the cultural heart of San Diego and home to more than 16 museums, multiple performing arts venues, 1,200-acres of lush grounds and other creative and recreational attractions. In 1977, Balboa Park was declared a National Historic Landmark District. Purchase the Balboa Park Explorer Multi-Day Pass for admission to more than a dozen Balboa Park museums and the San Diego Zoo®. Check out some of these favorites.

The Fleet Science Center connects people of all ages to the possibilities and power of science to create a better future. Explore and investigate more than 100 interactive exhibits. The museum also offers IMAX films, a gift shop and community science events.

The San Diego Natural History Museum, or The Nat, is one of California’s oldest and most respected cultural and scientific institutions. Founded in 1874, The Nat’s mission is to interpret the natural world through research, education and exhibits; to promote understanding of the evolution and diversity of Southern California and the peninsula of Baja California, Mexico; and to inspire in all a respect for nature and the environment.

Experience aviation history from the Montgolfier brothers’ hot air balloon of 1783 to the Space Shuttle and beyond. The San Diego Air & Space Museum houses a collection of historic aircraft and spacecraft from all over the world, including a flying replica of Charles Lindbergh’s Spirit of St. Louis, the actual Apollo 9 Command Module spacecraft and the only real GPS satellite on display in the world.

From monsters and beer history, to California Tower tours, to our relationships with animals and the truth about cannibalism – there’s always something unexpected to discover at the San Diego Museum of Man. Explore a variety of unique, interactive exhibits that cover a vast range of human history and culture.

The San Diego Museum of Art

The San Diego Museum of Art’s mission is to inspire, educate and cultivate curiosity through great works of art. The museum’s nationally renowned exhibitions include Spanish and Italian old masters, South Asian paintings including the Edwin Binney 3rd Collection of Indian paintings, and 19th and 20th century American paintings and sculptures.

The Gaslamp Quarter is a 16.5-block district in downtown San Diego featuring historic Victorian architecture, fine art galleries, theaters and museums. Explore the streets and the area’s colorful past on a walking tour past buildings dating back to the mid-1800s. At the Gaslamp Museum at the Davis-Horton House, tour the home bult in 1850 and learn about the city’s early history through exhibits.

Step aboard the retired USS Midway and walk in the footsteps of 200,000 Midway sailors who were part of the crew on the longest-serving American aircraft carrier of the 20th century. The USS Midway Museum features more than 60 exhibits with a collection of 30 restored aircraft.

Cabrillo National Monument commemorates the landing of Juan Rodriguez Cabrillo at San Diego Bay in 1542, the first European to set foot on what is now the West Coast of the United States. Learn about the voyage of Cabrillo, tour the picturesque Old Point Loma Lighthouse built in 1854 and take in spectacular views of San Diego and the Pacific Ocean.

San Diego’s 48-block Little Italy is the largest in the United States. Keep an eye out for the Little Italy Landmark Sign that commemorates this historic neighborhood that was once the hub of the world’s tuna fishing and canning industry. Explore the area’s patio cafés, pubs, art galleries, shops and beautiful Amici Park. Little Italy is a great off-the-beaten-path experience.

For help planning your vacation, contact us at [email protected].

Stay in the Know

News & offers straight to your inbox